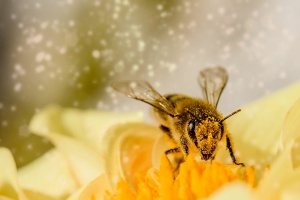 The honey bee is one of the most interesting insects on planet Earth. Not only are they the only insect to produce food eaten by humans, but they are vital to our very existence! Richmond Pest Control highlights some of the most fascinating facts, information and quick snippets about Apis mellifera, more commonly known as the honey bee.

Help Plants Grow: Roughly 80% of the fruits, vegetables and seeds grown in the United States were pollinated by honey bees!

Colonies are Divided into 3 Groups: Every member of the hive is divided into either the Queen, worker bees or drones.

Fly around 15MPH: Their small but mighty wings can reach speeds up to 15 MPH and beat around 200 times per second!

Great Sense of Smell: They need a great sense of smell in order to communicate with their fellow hive members and recognize different types of flowers.

Queen Bees Lay up to 2,500 Eggs per Day: She is especially busy during the summertime!

Only Female Honey bees Sting: Drones do not have the ability to sting, only female honey bees have stingers. However, if you are stung it is probably by a worker bee.

Male Honey bees (drones) Die After Mating with the Queen.

Foraging Honey bees Have to Visit 2 million flowers to produce 1 pound of honey.

Honey bees Can’t See Red: Many species of bees are incapable of seeing the color red. But the honey bee can still visit red flowers, because they can see the U.V. patterns.

As a pest control and extermination company, Richmond Pest Control understands the importance of preserving and saving these insects. If you have a large honey bee hive on your property, call a professional pest control company for a safe and humane relocation. Do not attempt to remove the hive and under no circumstance should you try to destroy it. Honey bees are an important insect that must be protected. Learn about other beneficial insects that should not be harmed or killed!

How to Safely Remove a Wasp Nest from your Yard